"Deep down in his heart the genuine Englishman has a rugged distaste for seeing his country invaded by a foreign army. People were asking themselves by what right these aliens had overrun British soil. An ever-growing feeling of annoyance had begun to lay hold of the nation.”

Clarence Chugwater is not a Boy Scout for nothing. It is summer 1909 and everyone is too interested in the Test Match to notice that England has been invaded by the Germans. And the Russians. And the Chinese. Not to mention a ‘boisterous band of the Young Turks’, a mad Mullah, and a brace of North African pirates. The government has recently abolished the army so there is nothing to be done about it anyway, except give a masterly display of polite indifference. But this would be to reckon without patriotic Clarence, ‘Boy of Destiny’, who alone is prepared to stand up to the foe, and who devises a highly unorthodox plan to restore his country to freedom…

The Swoop! Or, How Clarence Saved England reprints the 33 black and white drawings by C. Harrison that accompanied the first edition. It is supplemented by The Military Invasion of America, in which Clarence’s story is humorously transplanted across the Atlantic. 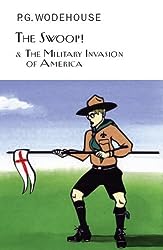