The Little Nugget (1913) is one of the novels in which Wodehouse found his feet, a light comic thriller set in an English prep school for the children of the nobility and gentry. Into their midst comes eleven-year-old Ogden Ford, the mouthy, overweight, chain-smoking son of an American millionaire. Ogden (whom we meet again in Piccadilly Jim) is the object of a kidnap attempt which forms the basis of the plot. The comedy arises from Wodehouse's favourite topics of Anglo-American misunderstanding and the absurdities of school life. 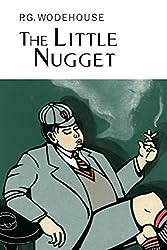