The first half of the story, found in Mike at Wrykyn, introduces Michael "Mike" Jackson. Mike is the youngest son of a renowned cricketing family. Mike's eldest brother Joe is a successful first-class player, while another brother, Bob, is on the verge of his school team. When Mike arrives at Wrykyn himself, his cricketing talent and love of adventure bring him success and trouble in equal measure. The second part, also known as Enter Psmith or Mike and Psmith, takes place two years later. Mike, due to take over as cricket captain at Wrykyn, is withdrawn from the school by his father and sent to a lesser school, called Sedleigh. On arrival at Sedleigh, he meets the eccentric Rupert Psmith, another new arrival from the superior school of Eton. Becoming fast friends, the two eschew cricket and indulge in all manner of high-jinks and adventures. 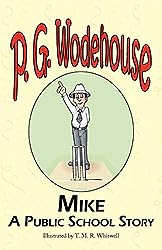