Everyone in Company for Henry wants to escape from something. Hard-up Henry Paradene would like to unload his hideous country house on his millionaire American cousin, J. Wendell Stickney. Wendell wishes he could be rid of his embarrassing aunt Kelly, while Kelly wants to escape her financial dependence on Wendell. Henry's niece, Jane, needs to part from her glamorous but ghastly fiancé, Lionel, while Bill Hardy, who falls for Jane, needs no convincing to abandon the bachelor state. Jane's brother Algey, meanwhile, spends his time thinking up dodgy schemes to lift himself out of poverty. Everything ends happily ever after for most of them, but only when they have been put through the hoops of a classic Wodehouse plot. 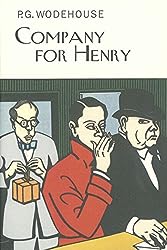