Most of the big money belongs to Torquil Paterson Frisby, the dyspeptic American millionaire - but that doesn't stop him wanting more out of it. His niece, the beautiful Ann Moon, is engaged to 'Biscuit', Lord Biskerton, who doesn't have very much of the stuff and so he has to escape to Valley Fields to hide from his creditors. Meanwhile, his old schoolfriend Berry Conway, who is working for Frisby, himself falls for Ann - just as Biscuit falls for her friend Kitchie Valentine. In this typically hilarious novel by the master of light comedy, life can sometimes become a little complicated.

Oh, and Berry has been left a lot of shares in the Dream Come True copper mine. Of course they're worthless... aren't they? 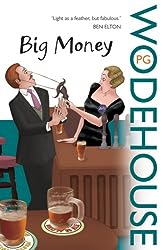