A Gentleman of Leisure

A Gentleman of Leisure

In this comic novel - dedicated to Douglas Fairbanks, who starred in the stage version - Jimmy Pitt, man-about-town and former newspaper hound, takes a bet that he cannot commit burglary. He finds breaking and entering easy enough, but then discovers that he has forced his way into the home of a tough New York policeman. Naturally, Captain McEachern has a beautiful daughter and problems of his own. The complications which ensue from their meeting, involving a rich cast of Wodehousean characters from both sides of the Atlantic, create one of his most amusing and light-hearted early novels. 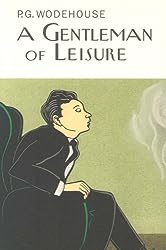 Films of A Gentleman of Leisure

A young New York society man makes a bet that he can rob a house and get away without being caught by the police. Shortly after making this wager, he overpowers a professional burglar in his own house, and instead of giving the man up, decides to use him in winning the bet. However, the house that he attempts to rob is the home of the Deputy Police Commissioner, with whose daughter he is in love. The succeeding complications, which arise out of this altogether original situation, are due to the Commissioner's willingness to accept graft and the professional burglar's inability to restrain himself when tempted to steal a valuable necklace. The final result is a happy conclusion to the very troubled love-story.