The Coming of Bill

The Coming of Bill

The Coming of Bill (1920) is the nearest Wodehouse ever came to a serious novel, although the influence of the musical comedies he was writing at the time is never far away. Bill is the child of Ruth, a spoilt heiress, and Kirk, an impecunious artist of perfect physique. Their marriage has been arranged by Ruth's aunt, a believer in eugenics who then takes charge of the baby. The story, set entirely in New York and Connecticut, concerns the young couple's campaign to retrieve their child from the overbearing Mrs Porter and establish a normal family life. They are eventually successful, but only after a series of comic mishaps in a story which features a galaxyof vintage Wodehouse characters, including the bossy aunt, a tetchy millionaire, a good-natured ex-boxer and an orotund English butler. 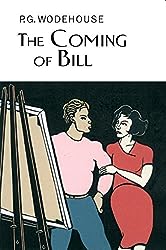