The only Jeeves story in which Bertie Wooster makes no appearance, involves Jeeves on secondment as butler and general factotum to William Belfry, ninth Earl of Rowcester (pronounced Roaster). Despite his impressive title, Bill Belfry is broke, which may explain why he and Jeeves have been working as Silver Ring bookies, disguised in false moustaches and loud check suits. All goes well until the terrifying Captain Brabazon-Biggar, big-game hunter, two-fisted he-man and saloon-bar bore, lays successful bets on two outsiders, leaving the would-be bookies three thousand pounds down and on the run from their creditor. Ring For Jeeves is the story of their misadventures as they attempt to evade the incandescent Captain, combined with Bill's attempt to sell his crumbling mansion to rich American widow, Rosalinda Spottsworth - who just happens to be Brabazon-Biggar's former flame... 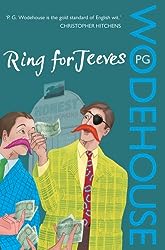