It takes a lot of effort for Jimmy Crocker to become Piccadilly Jim - nights on the town roistering, headlines in the gossip columns, a string of broken hearts and breaches of promise. Eventually he bacomes rather good at it and manages to go to pieces with his eyes open.

But no sooner has Jimmy cut wild swathe through fashionable London than his terrifying Aunt Nesta decides he must mend his ways. He then falls in love with the girl he has hurt most of all, and after that things get complicated.

In a dizzying plot, impersonations pile on impersonations so that (for reasons that will become clear, we promise) Jimmy ends up having to pretend he's himself. Piccadilly Jim is one of P.G. Wodehouse's most renowned early comic novels, and has been filmed three times. 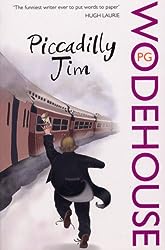 It's the 1930's. American sisters Eugenia Crocker and Nesta Pett are extremely wealthy and extremely competitive, with each disliking the other. Their latest quest of oneupsmanship has Nesta trying to marry off her niece by marriage, poetess turned crime novelist Ann Chester, to Lord Reginald Wisbeach, so that there will royalty in the family. This move is against Ann's wishes as she doesn't love the stuffy Lord. Meanwhile, Eugenia, now living in London, is trying to buy a royal title. Eugenia's current quest and others like it are always hindered by the notoriety of her stepson, James Crocker - better known as Piccadilly Jim, for the newspaper gossip column he used to write and the job from which he got fired - who is known as a womanizer, brawler, gambler and drunk. Jim is thinking about becoming more respectable when he meets and falls in love at first sight with a beautiful American visiting London. That woman is Ann, who hates what she knows of Jim, not only for that notoriety, but also because Piccadilly Jim the columnist once criticized her book of love poems (although it was not actually Jim who was writing the column at the time) which she felt ruined her career. Although Jim doesn't know why Ann doesn't like "Piccadilly Jim" as she has never met him, he, in his pursuit of her which takes them back to New York, assumes the name Algernon Bayliss, who is actually the Crocker family butler. Ann, who wants a man with an adventurous streak, too falls in love with "Bayliss", despite his overwhelming respectability, although she would prefer if he was a little more dangerous. Throw into the mix cases of mistaken identity (as the Petts and Crockers have never met), a German spy, a fake maid, a secret explosive liquid, and a not so kidnapping of a whiskey-swilling, chain-smoking child, and Ann may figure out what or who she really wants in life.

Jim's father wants to marry Eugenia, but her sister Netta refuses to allow it. When Jim sees Ann at a club, he falls for her even though she is with Lord Priory. He meets her the next day at the riding path, but she quickly loses him. He searches all over for her, not knowing that his father's fiancée is her Aunt. As his caricature work suffers as he searches, he is fired from his paper. But he makes a comeback with the comics 'Rags to Riches,' which is based upon the aunt's family. This upsets them so much that they go back to New York, and he follows, being careful not to let them know that he is the one who draws the strip that parodies them.