Monty Bodkin has returned to London from Hollywood, leaving Sandy Miller, his secretary there, heartbroken, because Monty loves English hockey international Gertrude Butterwick instead of her. Holding down a job for a year was the condition laid down by Gertrude’s father before Monty and Gertrude could be married, a condition Monty has unexpectedly fulfilled by blackmailing Hollywood movie mogul Ivor Llewellyn. Back in England, he intends to claim his bride, but the path to true love never runs smooth, as Monty is about to find out. 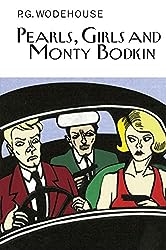