It wasn't Archie's fault, really. It's true he went to America and fell in love with Lucille, the daughter of a millionaire hotel proprietor . . . and if he did marry her -- well, what else was there to do? From his point of view, the whole thing was a thoroughly good egg; but Mr. Brewster, his father-in-law, thought differently, Archie had neither money nor occupation, which was distasteful in the eyes of the industrious Mr. Brewster; but the real bar was the fact that he had once adversely criticized one of his hotels. Archie did his best to heal the breach; but, being something of an ass, genus priceless, he found it almost beyond his powers to placate the "man-eating fish" whom Providence had given him as a father-in-law. . . . 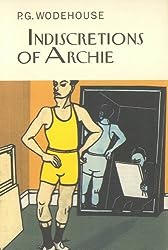