The ivied walls of Blandings Castle have seldom glowed as sunnily as in these wonderful stories - but there are snakes in the rolling parkland ready to nip Clarence, the absent-minded Ninth Earl of Emsworth, when he least expects it.

For a start the Empress of Blandings, in the running for her first prize in the Fat Pigs Class at the Shropshire Agricultural Show, is off her food ­- and can only be coaxed back to the trough by a call in her own language. Then there is the feud with Head Gardener McAllister, aided by Clarence's sister, the terrifying Lady Constance, and the horrible prospect of the summer fête - twin problems solved by the arrival of a delightfully rebellious little girl from London. But first of all there is the vexed matter of the custody of the pumpkin.

Skipping an ocean and a continent, Wodehouse also treats us to some unputdownable stories of excess from the monstrous Golden Age of Hollywood. 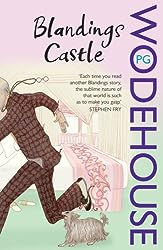 Films of Blandings Castle and Elsewhere

Blandings Castle is dysfunction junction, the home of a chaotic family struggling to keep itself in order. Clarence Threepwood, Ninth Earl of Emsworth and master of Blandings Castle, yearns with all his soul to be left in peace; preferably in the company of his beloved pig, The Empress. But he never is. There is always someone who wants him to do something. Presiding over the blitzkrieg on his equilibrium is the baleful figure of his sister Connie, with whom he shares the house; at her shoulder is Clarence's brainless younger son Freddie and a panoply of friends, enemies, servants, spongers, private detectives, bookies and confidence tricksters

Clarence Threepwood, 9th Earl of Emsworth, lord and master of Blandings Castle, wants nothing more than to talk to his prize pig and potter about in his gardens. Reality intrudes in the form of family duties and his strong-willed sisters.